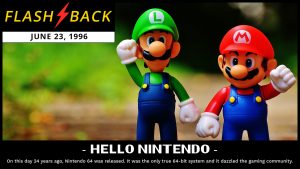 On June 23, 1996, the Nintendo 64 gaming console was released to great acclaim. It was the last console to use cartridges rather than CDs, and it boasted 3D capabilities and a controller that both wowed players and drove them absolutely crazy! The initial launch in Japan sold 300,000 consoles in one day, and three months later, the same number sold in the North American debut. This console became a fan favorite and was even named TIME’s Machine of the Year before being discontinued in 2002 upon the release of the GameCube. Read more technology information and advice on our Tech Tips webpage!