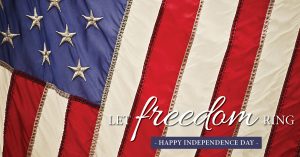 Did you know that only John Hancock signed the Declaration of Independence on July 4, 1776? Most of the founding fathers didn’t sign until August, but it was this great inciting action that set in motion our nation’s break from England and whose date has been celebrated every year since. Revelers and patriots in 1777 started the tradition of decorating streets and homes with red, white, and blue streamers, ringing bells, and even shooting off fireworks. Not much has changed, except maybe that now the 4th of July is a paid holiday — and we eat 150 million hot dogs every year on this holiday. That’s about 150 million more than George Washington had on his first Independence Day.